The Daily Bread - my love story to Italy

This is not a devotional piece, but it is a love story to Italy and Italian food, all brought on because I raided one of my Italian recipe books today and am making Chicken with Basil Cream Sauce tonight. Browsing through the recipes brought me back to my travels in Italy. Many of you know my tendency to wax eloquent on the topic of Paris and France, but for sheer love of life you can't go past the Italians. The French as a race tend to be reserved, while the Italians are polar opposites.

My travels in Italy have enabled me to verify that yes, depending on which region you're in, like France, the food will be different, depending on the local produce. But one thing that doesn't change much is the bread. Got to say, I'm not a fan of Italian bread. The real thing would make an excellent cricket bat if it was a little longer. Why? We got to the nitty gritty of this tough bread when staying in Tuscany on our first trip. 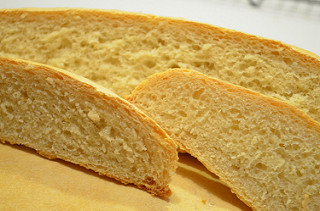 During WW2, Italy, like many countries, suffered terribly. Starvation was rampant, with the food going to occupying forces, leaving the local populace short. They lived on bread, but couldn't afford the salt tax, (salt helps preserve bread and adds a softness.) By the way, the Romans were one of the first to produce salt by evaporating sea water. It then became an export.

So, after the war, much like the bells that toll at midday in some Italian cities to remind the populace of the destruction wrought by war--executions, occupiers terrifying the occupied, or the bravery of the resistance, the Italians decided to keep salt out of the bread so everyone could remember the hardships of war every time they ate bread, which they do every day, often three times a day.

The Italians know a thing or two about bread. It has an almost transcendental role in Italian eating habits. Bakers are the high priests of cooking. In the '50s and '60s, commercialism came calling with mass-produced bread. Common sense and the Italian love for tradition defeated the invaders. The bakers, the panettieri, resumed their traditional role.

The popular pasta dura bread, typical of the Emilia-Romangna region, is considered to be the oldest type of bread, going back to Egypt, via Rome. The extraordinary breads originate on the two largest Italian islands--Sicily and Sardinia, but the most unusual bread is the carta da musica (music paperbread) from Sardinia. Made from unleavened dough, this wafer-thin bread was originally used by Sardinian shepherds during their lengthy periods away from home.

In my recently-released Under the Tuscan Moon there is a lot of food and drink consumed. Well, they say to write about what you know, lol! Set during medieval times, the basics were home-grown wine, home-made bread, home-produced cheese and grapes picked from the vines. I hazard a guess that things haven't changed that much!

Here is a brief excerpt from the end of Chapter One and the beginning of Chapter Two of my paranormal romance. The two vampires, Vipunin and Cuchulain watch wistfully as two humans enjoy a picnic in the forest...


"The male lifted a flagon of red wine and held it in the air, until the moonshine lit its liquid contents like a flame to a candle. It was an ancient, dusty bottle, probably a vintage from the Tuscan vines planted on the hillside overlooking this very forest.  Those vines he intended to visit for the vendemmia, the great harvest feast.
Those vines belonged to him.
As did the woman...

Vipunin gritted his teeth as he recalled the richness of the wine he once drank from his favorite pewter goblet while he watched the sun set over his vines. He could taste it now, wild and musky as he swirled it around his mouth. Once his life had revolved around the pleasures of the harvest, the pleasures of women, and the pleasures of wine-making.
He turned his attention back to the male and female, watched as they sipped from silver goblets engraved with a family crest. A thirst more powerful than his thirst for human blood overcame him. He drank nothing but blood, but now he longed to pour every delicious drop of that wine down his parched throat. Tearing a strip of bark from the tree, he pushed it into his mouth and crunched it to a paste. No one would hear him cry like a newborn.


‘Not now, Master.’ Cuchulain clamped him on the shoulder. ‘Not now. Soon. Now I ask you to wait. I am enjoying this watching.’


The female reached into the basket and drew out a red cloth-wrapped parcel. Ah, freshly baked bread. Vipunin inhaled its yeasty freshness, recalling the fragrance wafting from the kitchens below his rooms each morning on waking. He recalled sharing it with his betrothed at breakfast one morning after sharing a night of most delicious sinfulness with her in his secret chamber.


Drawing a dagger-like knife from the folds of his topcoat, the male hacked chunks of the doughy stuff onto a pewter platter. The female reached inside the basket, withdrawing a package enclosed in chestnut leaves. As she unwrapped it, the rancid smell of cheese drifted across the clearing, assailing the vampires’ twitching nostrils.


‘Always hated the stuff,’ Cuchulain sniffed. ‘My parents kept a cellar full of pecorino in various stages of ripening or rotting. I hated it when they asked me to cut a slice for the table. I never understood the appeal.'


‘You’d wonder at the mortals’ choice of food,’ Vipunin allowed, ‘but it is a good choice to accompany that vintage they drink. Ah,’ he laughed softly, ‘let them have their moldy cheese. And that superb wine. See that perfect bunch of grapes the male feeds the female? Picked from my vineyards, doubtless. Let them enjoy their last meal. They’re only human.’"


If you'd like to read more, check out my book in my sidebar. It's 99c, available from Amazon worldwide.

Now I'm off to create my Italian meal: 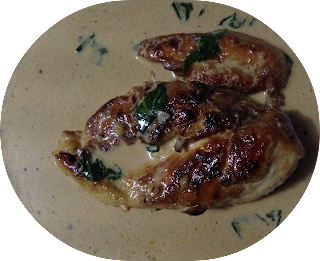 Method:
1. Combine flour, pepper and salt in a bowl and coat the chicken, shaking off the excess.
2. Heat oil and butter in a pan, add the chicken, cook over medium heat for 5-6 minutes each side. Remove from pan and keep warm.

3. BASIL CREAM SAUCE:
Wipe out the pan, heat the butter, add the garlic and cook for 2 minutes. Add chicken stock, cream and lemon juice, bring to boil, reduce a little.
4, Just before serving, add the basil, season with pepper and salt, and serve the sauce over the chicken.

SERVES 4 (or 2, depending if you've starved all day doing NaNoWriMo!)

AFTER DINNER REPORT: Absolutely delicious! I'll be making this again with fish next time. The flavours will work well...

Thank you for coming by!