WEP October challenge - my #flashfiction - The Strange House in the Woods.

Well, I'm back! Thanks to those of you who followed my trip on Facebook, but I mostly posted on Instagram. Was a wonderful five weeks, so now I'm struggling with jet lag which is particularly cruel this time. I'm getting about two hours of sleep a night, then teaching through the day which is a real hoot.

It's time for WEP again. Every October we host a Halloween challenge and we're ready to go. If you have a Halloween story in your files, you may like to post to the thread. Just click 'Submit' in my right-hand sidebar or go to the Write...Edit...Publish site. Love to have you.

Here goes...through the eyes of a child...

Inspired by a true story I read about what happened to those assisting foreign powers in war-torn countries.


The Strange House in the Woods

Yasmina hated being in these strange woods without her Dada.
By the time she and Mama reached the house, darkness was catching them. The house was big and black and trees stood all around, trying to hide the house from them.
Looking up at the sky, Yasmina saw a heap of tired old clouds with raggedy edges ripping apart, falling onto their heads like grey angels. The snow exploded while she danced around, arms in the air, catching snowflakes. Soon her gloves were soaked, so she ran across the frozen grass to the door. If they didn’t get inside it’d be dark. She hated the dark.
Mama was trying to stab a big key into an old lock, but she couldn’t budge the door. She was taking a long time, so Yasmina slapped her ears with her wet mittens and watched the snowflakes scattering.
‘Stop it!’ Mama yelled.
Even though she was freezing in the big coat the kind Red Cross lady had given her when she got off the aeroplane, Yasmina tried to stand still so Mama wouldn’t be angry.
‘Help me,’ Mama said.
They pushed and pushed against the door, grunting and groaning. Creak! Suddenly they both fell inside on top of each other. Yasmina laughed, but Mama said a bad word.
Mama hurried back outside and grabbed their suitcases. Dropping them onto the carpet, she said another bad word.
Snow had followed them into the house, blown in by the wind which howled like angry ghosts, swirling, tossing snow into their faces.
Bang! Mama kicked the big old door shut, then hopped around the room holding her foot and yelling lots of bad words. Finally, she stopped hopping.
Yasmina ran to the window and looked up the road where they’d walked from the car into the woods. Was Dada coming soon?

When she and Mama had walked the long and lonely road to the house, the trees scared her. They lined up along the road in black rows like the soldiers when they came to their village and took the fathers and boys away. She’d jumped with fright when clumps of snow dropped off the branches and fell to the ground, exploding like bombs. Mama had pulled her from her hiding place underneath some prickly bushes and she’d hit Mama, screaming, ‘I want my Dada!’
Mama wiped her tears and whispered, ‘I want Dada too.’
‘Why did Dada go?’
‘The bad men took him.’
‘Will Dada come back, Mama?’
‘He will never leave us, my child.’

‘Akham!’ Mama cried, slumping in the big stuffy chair near the fireplace.
Yasmina ran from the window and patted Mama’s twitchy hand. ‘Don’t cry Mama. Dada’ll never leave us.’ Finding an old blanket on the sofa, she covered Mama’s shaking shoulders.
Patting the flashlight in her pocket, she decided to explore the house by herself coz when Mama got the sadness for Dada it was best to leave her.
The room where Mama sat was big, bigger than their whole house back home, but not as pretty. The house where they'd lived before Dada went away with the bad men had coloured rugs on the walls and soft mats on the floors where they ate. Here, everything was brown, the colour of the bad men’s uniforms.
Pushing open a door, she entered a creepy room, with windows looking into the dark woods. There was a great big table in the middle of the floor with two lonely brown chairs. Opening the refrigerator, she saw food—not much—but Yasmina was hungry. Better not eat or Mama would be even angrier with her, so she took an apple from a bowl. Yasmina couldn’t remember when she last ate. Was it breakfast at the strange place where soldiers marched in rows outside? Or was that lunch? She couldn’t tell. The food had been strange.
Mama had whispered: ‘This is a hamburger. It is what Americans eat. We will get used to it.’ Yasmina’s stomach rumbled and hurt when she pressed it. Now she wished she had tried the brown meat bun.
She walked up the stairs, crunching the red apple which made a loud crack. She could walk to heaven. Maybe that’s where Dada was. The stairs groaned and cried louder than Mama. Spiders were knitting in the corners, trailing their threads down into the hall, their beady black eyes watching her.
She pushed open a door at the top of the stairs. Inside, there was a big cobwebby window in the roof and snow whirled around the black treetops and—she dropped the apple—there was a shadow in the corner.
She screamed, but Mama couldn’t hear with the wind howling and her howling.
But maybe…maybe…
‘Dada?’ She ran towards the shadow, but the ripped carpet tripped her.
‘Dada!’ Her flashlight clunked onto the floor. She grabbed it and switched it on, but when she shone the light around the room, Dada had gone…again.
In the middle of the room there was a big high bed with a fat lumpy quilt. She was so tired after the long walk, she jumped under the covers.
The mattress was so soft, it felt like she was sinking to the bottom of the earth on a puffy cloud.
‘Goodnight Dada,’ she whispered. ‘Come back. Mama needs you. I need you.’
The snow whispered and rustled through the roof window. She pulled the quilt higher over her head so she couldn’t see the branches shaking angry fists at her.
She was nearly asleep when she heard a voice – ‘Alima...Alima…Alima…’
Dada!
Who else would know Mama’s name?
Dada had come. Like Mama said.
Then she felt it.
A hand crept into her hand.
She wasn’t frightened.
Dada.
His hand felt cold. His fingers shook and curled into her palm, tickling, like when they played games at their home in the mountains.
She smiled in the dark, feeling safe. She’d been feeling scared for such a long time.
Dada's home.

Thanks for reading. Please click on the list in my sidebar with DL (Direct Link) after the name. Feel free to join the challenge! 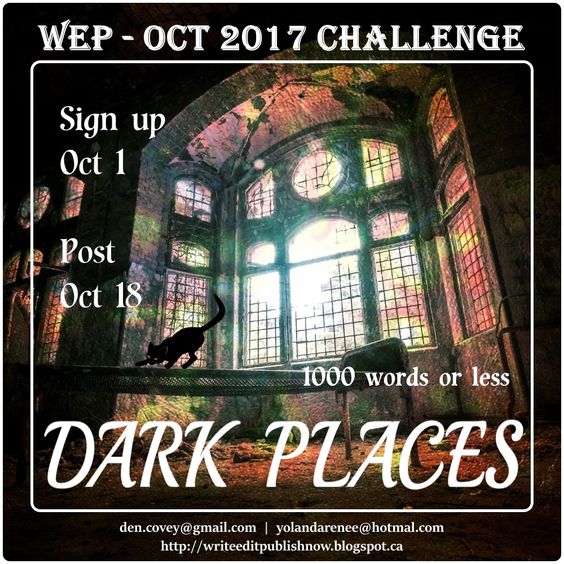