What are you writing?

Brisbane survived the G20. Life is returning to normal. There was no terrorism, just a few low-key protests.


November is NaNoWriMo month for many of us. I don't expect to finish 50,000 words this year, but I'm using the time to get a new story underway. If you're not doing NaNo, you are probably writing up your own little storm, editing your latest masterpiece...or thinking about Christmas while you plan your latest blog tour.

Here’s your chance to share and discuss with each other what you are writing about. 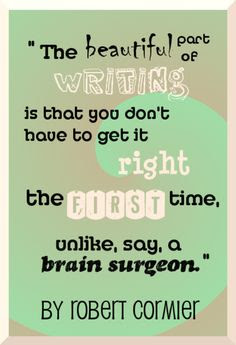 The G20 arrives Down Under to my sleepy little city of Brisbane.

The things you do to procrastinate when you're taking part in the NaNo challenge. I've been meaning to change my blog URL to something more sensible like my name and it just couldn't wait. So now I've botched up everything until the FeedBurner redirection kicks in.

If you are sweet enough to have me on your blogroll, please change the old URL to the new one. I'm sorry for the inconvenience, but I don't want to miss your visits (I know, I should have thought of that before I started messing around).

I lost my whole blogroll when I made the change. Too silly of me! So if you don't see your name on my blogroll, I am in the business of reinstating you. Give me a nudge if you wish. 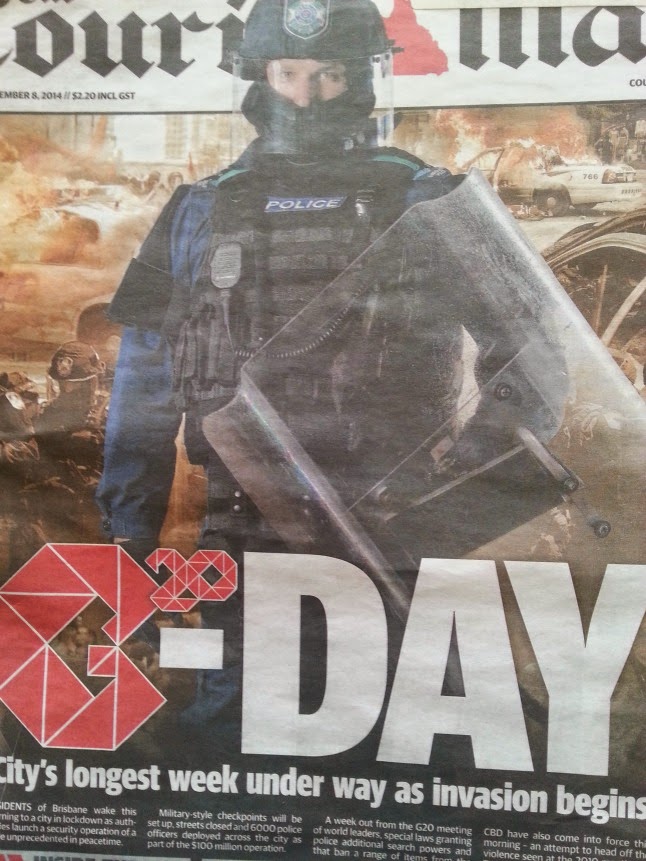 My city Brisbane is just a big country town of two million+ people. So why all the big guns are coming Down Under for their G20 meeting is beyond most of us. It's rather unsettling having images like this on the front covers of our local newspapers. We've already noticed a few changes to our laid-back lifestyle and on Monday we go into G20 lockdown. 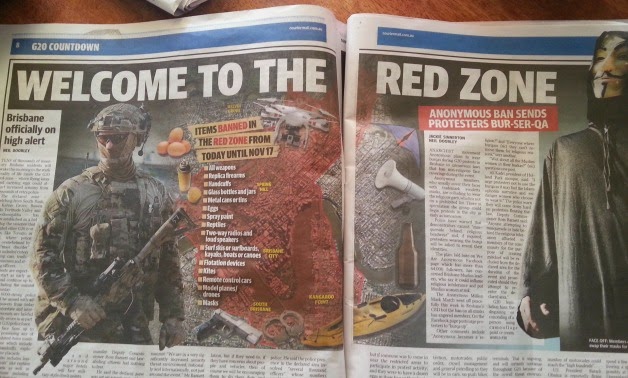 I live in the Red Zone, only a few hundred metres from the Exhibition Centre where the meetings are taking place. All sorts of restrictions are in place. Roads are closed. Barricades are up. Getting into the Inner City will be a pain. 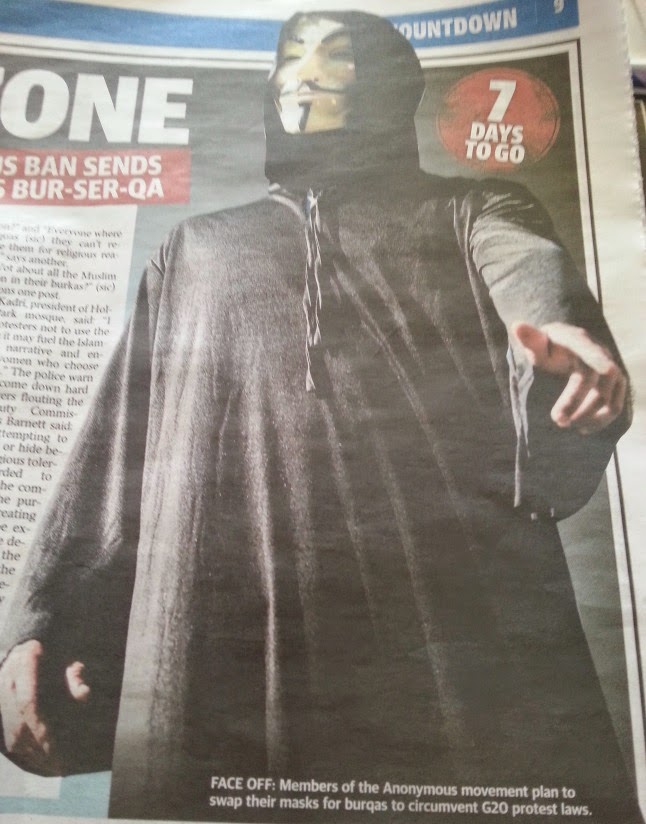 Seeing the face can only be covered for religious reasons, protesters are dressing in black burqas as they demonstrate against capitalism seeing that 80% of the world's economy is represented at the G20. So they will be using their smart phones, iPads etc, all products of capitalism to record events.

Lawyers are going to be everywhere on the lookout for any unfair treatment of protesters. Not sure what good that will do as police and military have been granted special powers during the summit. 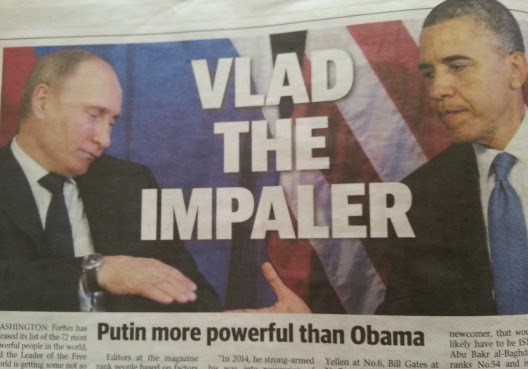 Of course egos will be through the roof. As you may/may not know our, um, rather silly Prime Minister Tony Abbot didn't want Putin here as he believes he's behind the shooting down of the MH17 Malaysian Airlines plane (I agree with Abbot on this one point and so do most Australians).

Of course, more powerful politicians than Abbot have said Mr Putin must come and Abbot must desist in his threats to 'shirt-front' Putin, whatever that means. 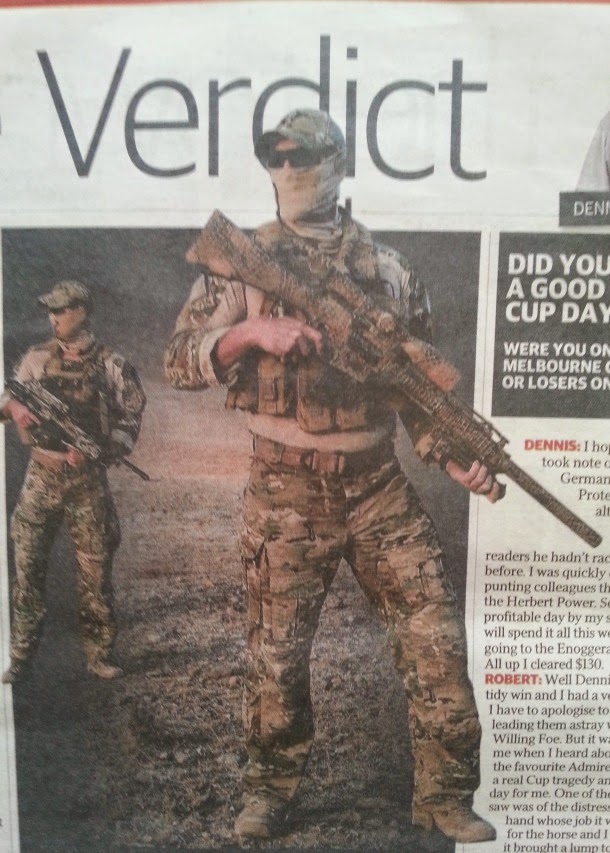 So dear, sweet little Brisbane has had to import police from all over Australia and even New Zealand for the event as there's not usually that much criminal activity taking place. Police numbers will be complemented by the Army. They will be needed as we're told that if we drive into the Inner City (which I have to do Sunday night) our car will be searched by 6 police or military and if we have any of the banned items on the 'restricted' list, we will be in big trouble. So I'd better leave the eggs and cans of food at home.

So, this week will be different for me and a lot of other citizens. I will be teaching from home as the State Library is closed as it's practically next door to the power centre. But there are some positives--lots of shows and light displays. Must get out and take some pictures, maybe for next post. The city is always lovely at night. Now it's even lovelier. 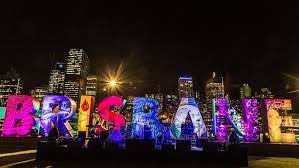 IWSG post - The Ten Best Sentences in fiction according to the American Scholar.

Welcome to another month and another round of IWSG posts. As we dive into NaNo or dive into our writing for the month, I thought I'd post some inspiring sentences.

I like to read A LOT and I like to consider the way some of the greats write in the hope that some of the magic will rub off on my writing. Here are some of the ten best sentences in fiction according to this article I came across online.

I think these sentences are pretty awesome, but also demonstrate how times/tastes change. No doubt some of you won't like these examples. Flick through and let me know which one you like best...or perhaps post your favourite sentence from your current WIP or a much-loved book.

Its vanished trees, the trees that had made way for Gatsby’s house, had once pandered in whispers to the last and greatest of all human dreams; for a transitory enchanted moment man must have held his breath in the presence of this continent, compelled into an aesthetic contemplation he neither understood nor desired, face to face for the last time in history with something commensurate to his capacity for wonder.
—F. Scott Fitzgerald, The Great Gatsby 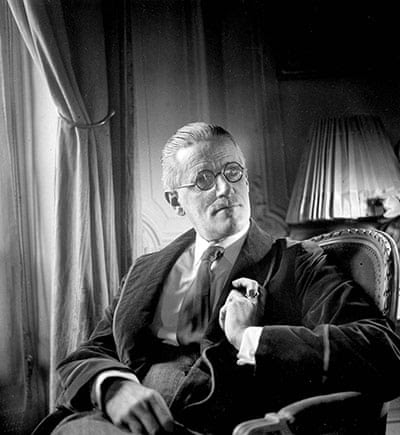 I go to encounter for the millionth time the reality of experience and to forge in the smithy of my soul the uncreated conscience of my race.
—James Joyce, A Portrait of the Artist as a Young Man

This private estate was far enough away from the explosion so that its bamboos, pines, laurel, and maples were still alive, and the green place invited refugees—partly because they believed that if the Americans came back, they would bomb only buildings; partly because the foliage seemed a center of coolness and life, and the estate’s exquisitely precise rock gardens, with their quiet pools and arching bridges, were very Japanese, normal, secure; and also partly (according to some who were there) because of an irresistible, atavistic urge to hide under leaves.
—John Hersey, Hiroshima
It was a fine cry—loud and long—but it had no bottom and it had no top, just circles and circles of sorrow.
—Toni Morrison, Sula
For what do we live, but to make sport for our neighbors, and laugh at them in our turn?
—Jane Austen, Pride and Prejudice
It was the United States of America in the cold late spring of 1967, and the market was steady and the G.N.P. high and a great many articulate people seemed to have a sense of high social purpose and it might have been a spring of brave hopes and national promise, but it was not, and more and more people had the uneasy apprehension that it was not.
—Joan Didion, Slouching Towards Bethlehem
Anger was washed away in the river along with any obligation.
—Ernest Hemingway, A Farewell to Arms

There are many pleasant fictions of the law in constant operation, but there is not one so pleasant or practically humorous as that which supposes every man to be of equal value in its impartial eye, and the benefits of all laws to be equally attainable by all men, without the smallest reference to the furniture of their pockets.
—Charles Dickens, Nicholas Nickleby
In many ways he was like America itself, big and strong, full of good intentions, a roll of fat jiggling at his belly, slow of foot but always plodding along, always there when you needed him, a believer in the virtues of simplicity and directness and hard labor.
—Tim O’Brien, The Things They Carried
There is nothing more atrociously cruel than an adored child.
—Vladimir Nabokov, Lolita
And a bonus:
Like the waters of the river, like the motorists on the highway, and like the yellow trains streaking down the Santa Fe tracks, drama, in the shape of exceptional happenings, had never stopped there.
—Truman Capote, In Cold Blood