A real-life #horror story. The Case of the Missing Heir. Where there isn't a will, there's no way.

Well, okay, there were a lot of Halloween/Supernatural/Horror writing challenges doing the rounds during October, and I've enjoyed reading the little shops of horror flashes, sometimes based on true stories, that were submitted to WEP for our Halloween challenge.

Now sitting down to read the Sunday papers recently, I came across this shocker, and the sad part is that it is quite a common occurrence, not just in Australia, but worldwide. Who'd want to end up like this? Here's Henry's story...

William Henry Florence died a lonely death. But he was not alone--he was surrounded by pile upon pile of murder mysteries.

Known locally just as Henry, he lived as a recluse in his rundown inner-city Brisbane home. Now just looking at the home, it's a wonder alarm bells didn't ring. Brisbane is a self-conscious city, squeaky-clean city, and the council is likely to pounce on you for not keeping your garden tidy, your exterior presentation up to scratch, or any unsightly rubbish lurking in your front yard is a no no (so smart citizens dump it out front for said council to collect.) 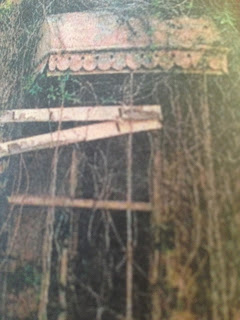 So Henry's house was highset, quite visible from the street in quite a ritzy suburb, yet the exterior was almost completely covered by vines and the trims looked rather the worse for wear. Life trundled on outside this abandoned-looking home, while the 94 year old's entombed body lay undiscovered for seven weeks. Ironically found by an 'honest' burglar who called his find into the police, Henry was found inside where every room of the home was crammed with floor-to-ceiling novels. He was a fan! 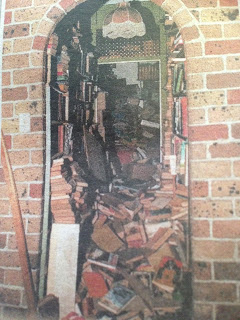 Henry died of natural causes. Had no will. So he's sparked his own posthumous true-life mystery called: The Case of the Missing Heir. His considerable estate remains unclaimed. His fortune stays buried.

Now as that abandoned Paris apartment turned up in several recent novels, I'm seeing novel potential in poor Henry's case. But was he 'poor' Henry? Certainly not in financial terms. Perhaps in the fact that no one missed him. But chances are, he was probably living his perfect life, surrounded by what he loved...books! I can raise my glass to Henry for that!

So, abandoned houses are rich fodder for ghost stories. When we come across a real-life house such as Henry's, it's just not so scary or thrilling...as just plain sad.

How about you? Do you get distressed by stories like this? Do you know of a similar one? Share with us.