My #WEP/IWSG Writing Together post for December. My #sci-fi #flashfiction. The Big Empty,

Time for the December WEP/IWSG 'writing together' competition. The challenge is Ribbons and Candles. The blurb said:

Perfect for the festival/festive season. Perfect also for flashes not themed around festivities or holidays. All prompts here work year-round and are pan-global. Genre, themes, settings, mood, no bar. Only the word count counts. And you could ignore that too and come in with a photo-essay or art, minimal words required.

A party. A power-cut. Gift-giving. Hair braids. Ribbons of roads, rivers, paper, love, hope. Candles in the room. Candles in the church. Candles in the wind. And any combo thereof. It could go in a thousand different directions, choose yours and step outside the square!

So I've come up with a sci-fi flash. Yep, you read that right. I'm no sci-fi writer, but I've just finished a year which as always included teaching George Orwell's 1984. Some of his invented words influenced me to write this little story. Yep. Another incarnation of Winston and Julia? Don't bother critiquing it; just enjoy it if you can!

This December we ask you to please post your stories from December 1st as we'll all be busy doing holiday things. 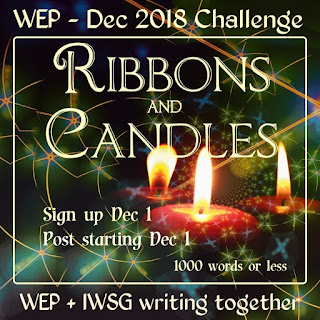 Edward saw that life on Xcelsior, which privately he called the Big Empty, was slowly emptying the life out of Rachel. Since her arrival, she had grown skinny, her complexion pale, and the eyes that looked at him from under her dank, brown hair tied in bunches with little red ribbons, were gray mist, lost and sad. Yet despite her lack of physicality, he experienced strange emotions every time he saw her. Something grew in his chest and moved upwards, causing his throat to close each time they rode the travellator to work.


Rachel. Thoughtful. Secretive. He counted it as extraordinary luck that they worked side by side – she the romance writer, he the poet.


Both had been shipped to Xcelsior, she from Bandanland, he from Paradox 21, to help prepare for the Annual Holiday Gathering and End of Year ReBooting of Minds.


‘We need your pens to create uplifting, soulful words for the season of celebration,’ the Grand Leader said when he met with them in his grandiose office pod penthouse in the grandiose structure called New Mind Central.
Rachel was quite famous on Bandanland and beyond for her romance volumes which were widely distributed in special reading pods. Her exquisite words filled a void in the population who suffered from a surfeit of technological breakthroughs, whose regimented lives permitted no time for reality romance. Indeed, in Rachel’s first lecture addressing the New Politic, she’d waxed eloquent on the need for love and romance in people’s lives to make a sterile world palatable.
Edward had studiously kept his face passive. He’d seen the Grand Leader and his minions frowning as she spoke. He saw it written on their faces – finding partners for the populace is our domain.
‘I cannot understand your poetry,’ she confessed during Social Time afterwards.
‘Few people can.’ He was a pedant, but the poems he penned for the Grand Leader were empty, soulless, utilitarian. The poems in his head were a different thing entirely. Thirty-first-century poets in the Poleaxer Galaxy were an obscure animal, even more unknown and irrelevant than their predecessors on the defunct planet Old Earth from which the Incarnates sprang.
‘Come with me.’ He leaned against a glass wall impregnated with bright flickering candles which reminded him of drunken slithering snakes. She leaned against him, the candlelight flickering over her face and lighting up her red ribbons like they buzzed with static electricity. It unnerved him, so he upended his glass of Health-Giving Herbal Tincture and swallowed the ghastly green goop in one greedy gulp.
‘I miss having someone who knows who Shakespeare was,’ Edward said, trying not to burp, well aware he had just committed Thoughtcrime. ‘I recite his sonnets every morning. It helps me retain a little of my soul.’
‘Looking around me,’ Rachel whispered, ‘I don’t see anyone who appears to have a soul.’
Rachel’s face seemed lacking in some way. Her muscles and tendons were strung out and defined, but didn’t really support her face frame. Odd. Was she a reincarnation? Or a robot?
She twirled one of her ribbons and his throat dried up despite the green goop. ‘The only thing I find scintillating is literature and –‘
‘And?’ There was that unfamiliar pumping feeling in his wellspring, that strange bellyfeel. Was it those red ribbons in her hair? He wanted to tug at each one and see her dank hair fall to her waist.
Edward decided that despite it being a sexcrime and despite her odd face, he was going to ask her to commit Goodsex with him, even though they could be relegated to the status of Unpersonhood for such a crime.
If the Love Ministry spies heard his next words, he’d be subjected to ReOrientation Activity Class after work each day.
‘I want to love and romance you,’ he said, his eyes flicking around the room nervously. He could be locked away until early in the Next Year because everyone would be too busy to think about him. They would be practicing Relaxation and ReCommuning and Mindfulness to prepare them for new great adventures while he languished in the prison pod.
Rachel smiled and patted his hand. ‘Sweet Edward.’
Then Edward understood why her face seemed curious and incomplete. Her face was a superstructure which until now had never supported a smile.
Leaving the drunken snakes impersonating candles behind, they returned to Edward’s pod and made Goodsex together. It was then clear to him what that something was that grew in his chest and closed his throat every time he saw Rachel. L-o-v-e.
Next morning, those first moments as they found their table for the Early Rising Egg Nog and Pancakes were like a new, exciting dance for Edward. It was the Xcelsior Annual Holiday Gathering and End of Year Resetting of Minds’s Eve. They sipped historic Egg Nog which originated on the Old Earth, followed by Xcelsior’s chef’s attempt at pancakes drowned in manufactured sweetener based on the honey also found on Old Earth.
The fat, yellow drink and the sweet pancakes brought a sparkle to Rachel’s cheeks. Edward thought: This is what it feels like to be alive. I never knew this feeling inside before.
As she nibbled pancakes and stared into his eyes, Edward bravely decided it was time.
‘Rachel, I want to share one of my poems from inside my head where it's been ever since I boarded the ship to Xcelsior.’
‘The Big Empty
by Edward Colterman
If I ventured into the Big Empty,
I would kiss the
fall of your hair; I would lie
beside you in the silence of candlelight,
and trace with my fingertip your lips’
surge and fall, the ribbons in your hair.
I would pull you gently from
the undermass,
the crystal and stone, like a spiderweb
from foliage, like
breath from a sleeper.
If I ventured to the Big Empty,
I would never stop looking for
you.’
‘Now that I have found you, Rachel, I am not empty anymore.’

With thanks to Tony Daniel, whose poem I adjusted.

996 WORDS - Comments only as this story isn't going anywhere...

Many thanks for coming by and reading. Click on names with a DL after them in my sidebar. 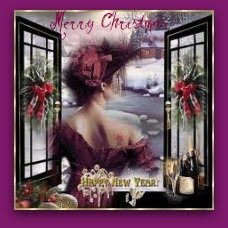