Thanks to Alex J Cavanaugh for starting this group and thanks to the rotating co-hosts. This month, please visit Alex's assistants,

Today my topic is Writing at the Desk.

We as writers might be sitting at our writing desk (your bed, the beach, the cafe), penning something for pure enjoyment. Okay. Rare. Most likely we're sweating over a masterpiece with a deadline, which is where writing loses its fun aspect. And where insecurity hits.

Jane Austen was prolific in her writing, with 6 major novels to her name. (See her full range of books HERE). The most popular has always been Pride and Prejudice which has had numerous adaptations. Considering she died at just 41 years old, she penned an amazing number of words--published novels, and some 3,000 letters.

When Jane Austen was 19 years old, her father George Austen recognised her prodigious talent. He bought her that little mahogany writing desk we see in the rare drawings of her. This was in the early 1700s. Don't tell me that Jane, a woman, felt secure writing away in those good old days, where, let's face it, women had fewer options than today.

Austen christened her beloved desk with a tale told through letters (remember them?) featuring the wicked and wayward Lady Susan Vernon, an unashamed adulteress. Jane didn't dream it would see the light of published day. This was her fun work. The wickedly audacious tale about Lady Susan was considered way too scandalous by Austen's family to ever be published. But, time marches on, and fifty years after her death, the controversial and unfinished work was published. The Kindle edition is FREE.

Many years later (early 2000s), enter Whit Stillman, American filmmaker. He fell in love with the witty and charming Lady Susan and has worked laboriously to turn Austen's epistolary novel (a novel written as a series of documents) into a screenplay.


"The family was right. It should never have been published. It is about a corrupt young woman who is a mistress of manipulation in her attempt to make the world her own. Lady Susan is a terrific find. It was Austen's first adult work."

Stillman has named the adaptation, Love and Friendship, and has attracted big name actors--Kate Beckinsale is Lady Susan.

We usually think of Jane Austen as tame. Chick lit claims her as its heroine, one of the first chick lit writers. Think Emma and you can see where they're coming from. There are multiple Jane Austen fan clubs and reading groups, and novels written about her. She has become a commercial commodity, even having zombie films and books adapted from her novels. Think Pride and Prejudice and Zombies.

If we think of the old adage 'write what you know', Austen must have been a very critical observer of her times. Her Lady Susan letters show her as a serious comedian with an incredible perception of the world as she knew it.

Lynda has gouged out some time from her frantically busy life to pen a daily devotional to help in the chaos of life.

Blurb: Cling to God is a book of devotionals for every day of the year. The aim is to encourage Christians in their faith, to help them think about their beliefs and learn more about God. The devotions are short and inspirational so that people with busy lifestyles will still be able to spend time with the Lord each day. It will appeal to a wide Christian audience, to those new in their faith as well as those matured beyond milk and honey. 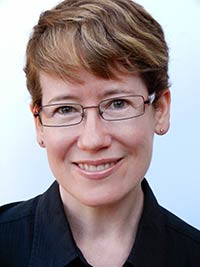 Lynda R Young, a Christian first, writes devotionals, articles, and speculative short stories. In her spare time she is also an editor, game developer, artist, and dabbles in photography and all things creative.She lives in Australia with her sweetheart of a husband.

And the question of the month for #IWSG is:


What was your very first piece of writing as an aspiring writer? Where is it now? Collecting dust, or has it been published?

The Inlinkz form is up. You can now sign up for the WEP GARDENS challenge in my sidebar or over at WEP or on Yolanda Renee's blog. Post from August 17 - 19. 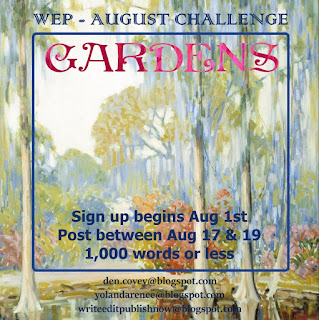