My RomanticFridayWriters story this month is set on a ferry crossing the Aegean Sea in post-second world war Greece. If you were expecting a hot and steamy honeymoon story, I'm sorry to disappoint. I'm sure there will be one of two, so click on the names and read some more entries during the next three days.


Eirini’s Journey Across the Aegean Sea 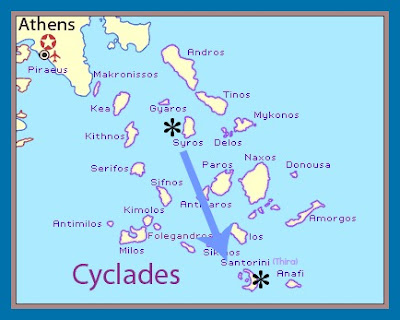 The war was over. The occupied forces had fled her island.

Eirini was fleeing too.

Sunrise sparkled the still water with silver and gold. She squinted, desperate for a last look at her home. Syros was a vanishing bony apparition--shadowy mountains, dark earth, white stone--an island of shattered dreams.

The early morning sun blurred the scene, but she recognised faint lines, tiny roads winding up slopes like wobbly mirages, jagged roads that led to her cave. She watched until she saw nothing but tears.

She huddled in a corner of the boat, scrunched between filthy tyres and rattly drums. The sun was now a relentless heat haze of Greek summer, beating her head, her arms, turning the black water gold.

Aunt Acacia had accompanied her to the ferry just before dawn, screaming endless instructions before placing a linen-wrapped object in Eirini’s hand. But Eirini was to travel alone, criss-crossing the Aegean Sea to Thira...and her fate.

The air was as hot as Hephaestus’ breath as she sat, surrounded by a sea, still as olive oil. Shadows in the water slithered past the boat, playful as dolphins. She stood, leaned over the side, reached out her free hand.

An angry shout from the upper deck. “Idiōtēs! Get back!”

Eirini dropped on to an upturned drum, smudging her white pleated skirt. “Eiie, Syros,” she wailed. “You are ruined. The long years of war have broken you.”

The Golden Age of Syros had shot into oblivion, smashed by bombs, killed by artillery fire.

Even the soil was dead. It could not feed her people during the war. There was food for the Germans and Italians, but not for Eirini’s people. Her people starved by the thousands.

A tear trickled down her face as she remembered how things used to be before the war. Stone mansions straddled the waterfront, stood proud in the sea like Venetian palazzos. But now Syros’ mansions were fallen on their knees in the water like partisan fighters begging for life.

Her parents bartered their mansion for food – six gold coins bought some onions and potatoes. When there was nothing left to sell, they scavenged wild herbs, boiling them over burning sticks in their cave.
***
For Eirini the terror continued. Her husband’s figure loomed large--the boy her father had chosen for her. Her father was dead, but the boy arrived to claim her when the war ended. She’d danced with him. She’d laughed with him. A few broken plates, then he was gone.

Now Alexandros Christofis waited for her in Thira.

Familiar hunger pangs tore at her stomach. She cast the linen-wrapped parcel gently aside and reached into her tied handkerchief for pistachios. She’d save her Aunt’s white peaches, ripe tomatoes, olives and bread for the bus journey.

Nibbling her sweet nuts, Eirini cursed the sun which blurred the vision of this new island as it rose out of the sea. Thira, her soon-to-be home was a fairyland. As the boat approached, Eirini’s first impression was of square white houses clambering up towering cliffs, surrounded by a perfect blue sea. 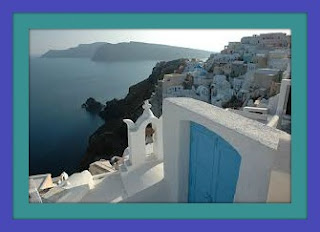 Fira--whitewashed cave houses, narrow streets, unsmiling, hunched figures in black. The sounds of a Greek summer’s evening welcomed her as she disembarked--a young man, an Adonis, strummed a mandolin outside a taverna and winked at her. She clutched her bag to her stomach and ran to the bus station, leather sandals slapping the broken cobblestones.

***
The belching bus veered along a precipice, climbed higher, higher. The road wound around the island’s narrow spine – to the left she could see the caldera, the water a deep, misty cobalt. To the right were terraced fields falling steeply to the sea. She took comfort in the flowers – groves of butter-yellow and pink blooms. How she’d love to touch them, drink in their fragrance. Perhaps…in the future…

At the highest point of the island she saw the centre of the caldera where the Kameni stood like burning sentinels. Eirini imagined the earth crashing, the Kameni shaking their fists at the people who dared invade this sacred home of the gods. It brought to mind a poem her mother often chanted:

…this mineral landscape
of rock and sea, sapphire and diamond,
which to the wheel of Time offers nothing
that’s perishable.

***
Alexandros Christofis waited at the bus station in Oia. His wedding had taken place two months ago, when his bride's mother still lived to give her blessing.

Now his bride came to him.

He watched her step from the bus, pause, then her black eyes found his. She was graceful. She was beautiful. And she was his.

“Kalispera” (Good evening). He took the bag from her trembling hand.

“Kalispera.” She hung her head.

“Don’t be afraid, γυναίκα (wife).” He pressed her hand. “Come, we will eat in the taverna, then I will take you to our home.”

***
Our home. Strange new thoughts whirred around Eirini’s head. Her husband had been a fleeting spectre on her wedding day, but now she couldn’t help staring at him across the blue and white checkered tablecloth with its jug of bright yellow flowers. Bathed as he was in the rays of the setting sun, he was young Orpheus returned to earth with his tall, strong body and black curls tumbling past his shoulders. But his hands were not those that stroked a lyre – his callouses sang the song of hard labour.

“What work do you do?” She sipped sweet wine and touched the heads of the pretty flowers.

“I work in the pumice mines. The days are long and hard, but the nights will be ours.”

Eirini squirmed, just a little. “What is your house like?”

“Our house is a cave house, dug into the soft volcanic rock of the hillside, made with my own hands, with love for you and the children we will have if God wills.”

Eirini blushed, pleased with him. She was used to this type of home now. It would be cool in summer, warm in winter. She caressed the linen-wrapped object in her lap. Under the dome she could put her statue of St Dimitri where she would pray each day.

Efxaristo (Thank you), St Dimitri. She gazed across the table at her beautiful husband.

***
Alexandros caught the gleam in her eye. He reached across the table and kissed her hand. It was going to be all right. They would begin their honeymoon this night. They would find joy in each other as God allowed.

POSTSCRIPT
Thira is more commonly known as Santorini. In the timeframe of my story, the city of Oia in the north was badly damaged by an earthquake in 1956, some years after Eirini arrived at her cliff-side home. I wonder did she and Alexandros survive? Well that would be another story.

Some say there is no Greek term for 'wife', but I found one which I've used in the story. 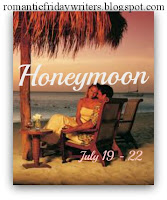 This is my story for the RFW Honeymoon challenge. I've been researching Greece for a future trip, and got quite caught up in the history as I'm wont to do. But my story is an example of how RFW stories aren't necessarily HEA romances -- they are usually stories or poems with a romantic element.