Roland D Yeomans' French Quarter Nocturne - what really happened in the wake of Hurricane Katrina? And a fantabulous contest! 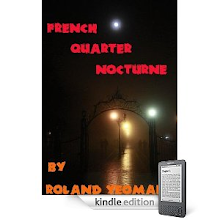 Who can keep up with Roland D Yeomans? In the last few months he has self published 11, yes, 11 e-books. Roland's lyrical prose and dark plots are amazing. I'd like to read and review all his books, but unless I put everything else on hold it's an impossibility. So I've been slow to read French Quarter Nocturne, but once I'd re-started it (I'd begun it some months ago) I was hooked into the story, which is the way it should be if the writing's good.


I've always been fascinated by this particular part of the States - New Orleans and the South in general. When Hurricane Katrina struck, I was dumbfounded at her fury and dumbfounded at how long it seemed to take to get help to these suffering citizens. Who knew what was going on in the Convention Centre? Obviously Roland's Texas Ranger, Samuel McCord knew exactly what was happening...


Hurricane Katrina has cast New Orleans into darkness. Predators, living and undead, close in on the helpless survivors. Can Samuel McCord and a vampire priest keep the French Quarter from being drowned in blood?

is set during the aftermath of hurricane Katrina, which devastated the proud, unique and unfortunately low-lying city of New Orleans. People struggled with what was happening in the wake of this disaster. How could they make sense of it? How could they come to terms with the horror?


Dark elements are abroad on the mean streets of New Orleans. The music is of a much darker cast in the jazz club Meilori's which has shimmered into life on Royal Street. Here it is a Crossroads of Worlds. Monsters  are stalking the streets. Ghosts and vampires are abroad in an attempt to provide leadership in a leader-less city, to bring at least a semblance of order out of the mayhem and destruction that has occured. There are normal reptiles slithering around in the dingy waters but they don't pose much of a threat.  Far worse than snakes, the chaos in New Orleans has given the European revenants a one-off chance to establish a beachhead in America. Worse yet, McCord's life-long enemy, DayStar, is plotting in the shadows.


Who can step up into the void?


Against the backdrop of Katrina's aftermath, an agnostic jazz club owner and his best friend, a haunted priest, engage enemies in the shadows that challenge both their belief systems. Sam McCord, a Texas Ranger, is trapped in a nether world with those who cannot cross over to the other side. McCord is a hero in his own right, but all the same he has personal issues that often tug at his heartstrings. But it is the memory of one woman, Meilori, that never leaves him, that dogs his footsteps. Even in the murder and mayhem and lawlessness of post-Katrina, Sam never allows that others should commit atrocities. But is Sam McCord an innocent? Does he ever do the 'wrong' thing when dire need comes calling?


The French Quarter Noctune is a fantastic read, and you get used to bizarre instances where persons from mythological tales take centre stage. We meet famous writers from the past, too, all adding gloss to the many-layered story. But I warn you, if you must read it at night at least keep the light on.

If you've read any of Roland's books, you may be interested in:

Your mission, should you choose to accept it,
is to write a review on Amazon of one of my 11 eBooks. (I hope, of course, that it is a good review --
but bad breath is better than no breath at all.)
Write such a review and you get FIVE, that's right,
FIVE entries into my FANTABULOUS CONTEST.
The entries are being safeguarded by my best friend, Sandra Thrasher --
who says she will break my fingers if she catches them in the huge jar. She will pull.

And 3 lucky people will have won either

SEPTEMBER 1ST is the draw date.