If you're looking for my UNDERRATED blogfest entry, it's been relegated to second place.
It's time for the Write...Edit...Publish challenge again. This month is CHANGING FACES, a wide-open challenge. I've chosen to re-post a story I wrote for #FridayFlash a couple of years ago. Everyone seemed to enjoy it, so I thought I'd let it do double duty as I'm having a very busy month.
It's a story about the Queensland outback which I linked to in my recent post on Richard Hughes' blog. If you actually followed the link and read my story, I apologise.
I've added some images of Australia for you.

Indigenous Australians are not only the most profoundly disadvantaged group in Australian society, but the most discriminated against. There are some references in this story you may not get, but suffice to say in Colonial Australia, Aboriginals were often referred to as 'Jacky Jacky' and Aboriginals used to wryly call themselves 'King George' after the English king at this time. Of course, Indigenous Australians ran rings around whites when it came to surviving the outback.

A Thirst Before Dying

You don’t want me to stay with you then?
No. I’d prefer to be alone.
I could stay until…
No, it’s best for you to leave now, see if you can find a way out of this god-forsaken place.
Look, there might be water just over that ridge. I’ll go and come back with some as soon as I find it.
Don’t worry about me mate. I’m done for. Listen to me croaking. Let’s invent our own bush lore – every man for himself, none of this laying down your life for your mate…
I’ll feel bad…
Rubbish mate. Just go and let me get on with it. You’d be a silly bugger to stay here and rot. You’ve got a chance. Take it. You know I haven’t got a snowflake’s chance in hell of surviving. It's as hot as hell here. I can feel myself cooking from the inside out.
But…
Go, you ugly bastard. And get that woeful look off your face. I don’t want you here. Get on with it. At least one of us silly buggers will survive.
Look, it’s my fault. I was the one who got us lost. I really thought I knew where I was going...
Turns out you didn’t, but we aren’t the first and we won’t be the last to be tricked by the Australian bush, mate. You know that. We broke every rule in the book--leaving the car, not enough water, then I went and broke my bloody leg to boot. That ends it for me. No chance of me getting out of here now. Think about it. I'm right...Go!
***
I woke to the pain throbbing through my busted leg. I rolled over, took a deep breath then looked down. The leg didn't seem to belong to me.
I was astounded to see how fat it’d gotten while I drowsed. Nothing I could do, so I just lay there, trying to will myself to feel nothing even though the sun was now directly overhead, frying me like an egg on a car bonnet.
How will it feel to die of thirst?
I once read about an old salt who survived nearly seven days in the Arizona desert without water. Well, I’d been about three days and I knew I wasn’t about to break Mr Valencia’s record.
I ran my tongue around my mouth, felt saliva as thick as paste. My tongue clung to my teeth and the roof of my mouth. I felt like I had a golf ball in my throat. My head and neck throbbed like I'd been hit with a golf club!
At least it’s taking my mind off the pain in my leg.
My face felt like a full moon and my skin was like thin crackly parchment when I touched it with my shaking fingers. I knew before too long I’d be a raving lunatic. I’d start hallucinating. I didn’t want to be around when that happened.
It was a toss up between pain and thirst. Which would kill me?
***
I’d fallen to my side while I slept. I didn’t want to die lolling like some old abandoned guy in a nursing home. With a few grunts and groans I managed to heave myself up a little and prop my back against the red sandy rock. 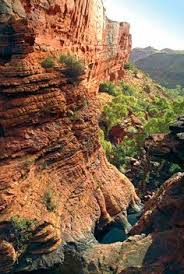 The dry valley lay spread before me, shimmering in the heat. I could swear I saw water but I knew that was a mirage.  The reds and ochres of the steep gorges soothed me, taking my mind off the possibilites of that inland sea.
I’ve always loved this country, especially the outback. Unforgiving though. Only the tough survive. Better add smart to that. Not smart to get lost, break down, then run out of water, you useless clot.
I thought of old Herb. I hoped he’d been smart enough to find some water by now or he’d be propping up a rock too, or eating sand.
***
My eyes were just slits, but I noticed a pair of wedge-tailed eagles merge with the red rock, flying between the harsh blue sky and the ochre cliffs like children at play while the sun kept vigil like a protective parent.
It was a sinister brutal world out here. I hereby name you ‘Tarrangaua’. I smiled to myself, feeling like King George. I knew that meant ‘rough red hill’ in Aborigine. Smart arse!
A thick pain pushed up against my chest. There was a whooshing in my ears. Here comes the deafness...
But I could hear a crunching sound reverberating around my head. I swear the rock I was leaning on shook, so I must have reached the hallucinating stage. Didn't even need a pill! I grinned what I knew was a terrible grin, feeling my gums and teeth protruding like some zombie's. My face would be unrecognizable if anyone ever found me.
‘What are you doin’ sittin’ here in the sun you silly bugger? Hardly Bondi Beach, you bum.’ 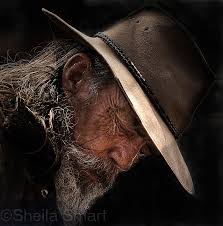 Looming over me looking like the Grim Reaper I could just make him out with the bright sun behind him. All I could really see was a wobbly outline of a face. I blinked and the face morphed into one as black as the ace of spades with a beard as white as snow all under a black Akubra hat with silver studs that glinted in the sun, hurting my eyes.
‘Ouch! Jacky Jacky?’ I croaked.
Every Australian knows an Aboriginal tracker is called Jacky Jacky, even a city slicker like me.
‘No mate, not Jacky Jacky. I’m Mr Theodore White, but who’s askin’? Looks like you could use some help and quick before you turn into one tough piece of steak.’
‘Hey, I’m King George,’ I said only half-joking. Who am I?
‘That's my line. He died long ago mate. You don’t wanna be him.’
He lowered himself close to my face, cradled my head in his great black arms and let me take a few sips from his coolamon (water canteen).
I tried to touch his hat just to prove he was no hallucination, but it was out of reach.
The water felt real enough. Its coolness was the most beautiful thing.
‘That’s enough King George. Only a drop at a time or it’ll kill ya.’
I tried not to cry like a baby when he took the bottle away.
‘Found ya old mate,’ he said, as he began tending my leg with the deft moves of ancient Aboriginal lore guiding his hands.
‘What? Who?’ I rasped. Then I remembered old Herb.
‘The other poor bugger you musta been with. He was roasting in the sand in the dry riverbed. Musta gone to sleep thinkin’ he was in the water, seein' a mirage. No savin’ him. His face was burned to a crisp. But looks like you’ll make it, even though your face will never be the same again.’

CONTEST ALERT!!
And I've just submitted the first chapter of my romance, Fijian Princess, in a Harlequin So You Think You Can Write contest. I'd love it if you'd click this link to my story and read it and comment. Thanks!! Here is the link to the contest if you have a full manuscript ready and would like to enter!