A Mother's Offering to Her Children - What legacy do you wish to leave for your children?

I'm currently in Townsville, North Queensland for a week, celebrating with my daughter who has just received her degree in Social Work, Honours, from James Cook University. Her ceremony is tonight.

Thinking about the relationship between mother and child, my reminiscences brought me to Australia's first children's writer and her book, A Mother's Offering to Her Children. It was published 170 years ago by a woman known as 'A Lady Long Resident in New South Wales.' For almost a century her identity was Australia's most puzzling literary mystery.

By researching the 'Lady' in the 1960s, Marcie Muir, an award-winning Australian author of 25 books, uncovered one of the great lost stories of Australian history..

Eventually Muir's research found the 'Lady's' name - Charlotte Waring, a child prodigy who could read at age two. Her father was a man of fortune whose ancestors had come to England with William the Conqueror. Charles Darwin was her fifth cousin. All the father's money went to her brother, so Charlotte found a governess position and travelled to Sydney. Charlotte married a wealthy man, James Atkinson soon after arriving in Sydney. After her husband died, leaving the estate to his son, Charlotte remarried George Barton, a violent drunk. She eventually fled with her children. She had to find some way to house, feed, clothe and educate her children who were literally starving. So she wrote a book, an instant bestseller.

She released her novel in 1841 in time for Christmas. It appealed to adults as well as children, filled as it was with descriptions of storms, shipwrecks, strange animals, fossils and cannibals. Her income from it provided for her family for many years.

The book was structured as a dialogue between a mother and her four young children, complete with moral instructions and outmoded Victorian sensibilities. Charlotte wrote about what she knew - Australian history, native trees, birds and animals, the life of a settler, the first to feature the life and culture of the Australian Aborigines. She based her stories on those she had told her own children, who had lost everything - their father, their wealth, their home. Through these stories, she created an enchanted circle where her children knew they were loved.

The first edition of A Mother's Offering to Her Children is now valued at $60,000.

'We know not the day, nor the hour, when time may cease for us; and we be summoned into eternity. Let us, dear children, endeavour to profit from the frequent warnings we have of the uncertainty of life...(Let us) so pass through this life that we gain a knowledge of the things which belong to our peace; and become at last heirs of immortality!'

Charlotte was the mother of the first Australian-born novelist, Louisa Atkinson.

As a mother, I'd like to leave a literary legacy to my children, but I doubt I'm a Charlotte Waring. So, Candice Covey, your family (especially your mother) is very proud of you for never choosing the easy road. 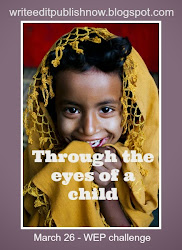 Email ThisBlogThis!Share to TwitterShare to FacebookShare to Pinterest
Labels: A Mother's Offering to Her Children, Charlotte Waring, Marcie Muir, Through the eyes of a child