Time for us to throw our insecurity hats into the ring for the month of June, or to tell us how to overcome our insecurities.

Many thanks to Alex J Cavanaugh and his awesome co-hosts for the June 1 posting of the IWSG will be Murees Dupe, Alexia Chamberlynn, Chemist Ken, and Heather Gardner!


Over to my special guest, Chrys Fey...


Tips to Defeat the Insecurity Monster

Writers are no strangers to insecurity. That’s why Alex created this nifty group, right? That’s also why there’s so many of us.

During the course of writing and publishing a book, we can encounter many insecurities. We question our writing skills, agonize over our lack of writing time and even our writing speed. Then we stress over revisions, critiques, and edits. Querying and submitting brings an all new insecurity to the table with the threat of rejections and the torturous waiting game. Once we move on to the publishing gig, new insecurities dawn: release day, marketing, finding readers, getting reviews, and stressing over sales and bad reviews. It is a lot to deal with, especially back-after-back, but the good news is that none of these are insurmountable.

Every write experiences these same insecurities and struggles. While knowing that doesn’t help us in the moment or show us how to deal with them, it should relieve us in knowing that we’re not alone. And because we’re not the first (and won’t be the last) to face these insecurities, there are countless writers/authors out there who can offer us guidance, advice, and help when we need it. One good place to look for that is within our group.

When I was insecure about the release of Seismic Crimes, many IWSGers signed up for my release day promo, blog tour and supported my Thunderclap campaign. In the past, IWSGers rooted me on when I was going through personal problems, offered to beta read for me when I had no one and gave me courage.

I wish there was a sure-fire way to beat insecurities as they come, but there isn’t. There are, however, some techniques you can do to help you move past them.

You’re stronger than any insecurity you will ever encounter.

2. Give yourself a break.

We’re not perfect. We make mistakes, and we have to learn.

Put your book away for a few days so you can return to it with fresh eyes. Also try to look at it as an outsider (a reader, not the writer).

When you’re facing an obstacle that seems bigger than you, break it down into smaller (manageable) steps. Then tackle each one at a time.

After you’ve done all you could with editing, promoting and marketing, it’s time to seek help. There’s no shame in doing this. It’ll take a lot of stress off you, and you’ll be surprised at how many people want to support you.

While writing and preparing for the release of Seismic Crimes, I did each of these techniques for every insecurity I encountered. And guess what? I’m secure now! There are some things in the future that may bring new insecurities (book signings/events, etc.), but I’ll do these steps and I’ll defeat it! 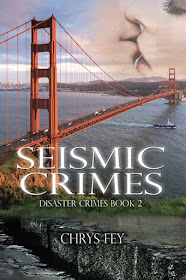 An Internal Affairs Investigator was murdered and his brother, Donovan Goldwyn, was framed. Now Donovan is desperate to prove his innocence. And the one person who can do that is the woman who saved him from a deadly hurricane—Beth Kennedy. From the moment their fates intertwined, passion consumed him. He wants her in his arms. More, he wants her by his side in his darkest moments.

Beth Kennedy may not know everything about Donovan, but she can’t deny what she feels for him. It’s her love for him that pushes her to do whatever she has to do to help him get justice, including putting herself in a criminal’s crosshairs.

When a tip reveals the killer's location, they travel to California, but then an earthquake of catastrophic proportions separates them. As aftershocks roll the land, Beth and Donovan have to endure dangerous conditions while trying to find their way back to one another. Will they reunite and find the killer, or will they lose everything?

Chrys Fey is the author of Hurricane Crimes, Book One in the Disaster Crimes series, as well as these releases from The Wild Rose Press: 30 Seconds, Ghost of Death, and Witch of Death. She is an administrator for the Insecure Writer's Support Group and has participated in the Blogging from April A to Z Challenge.
When Fey was six years old, she realized she wanted to be a writer by watching her mother pursue publication. At the age of twelve, she started writing her first novel, which flourished into a series she later rewrote at seventeen.
Fey lives in Florida and is always on the lookout for hurricanes. She has four adopted cats who keep her entertained with their antics, and three nephews who keep her entertained with their antics. You can connect with her on Facebook, Twitter, and through her blog, Write with Fey. She loves to get to know her readers!

Thanks for talking to us about insecurities, Chrys. Here's my best wishes to you for an avalanche of sales for Seismic Crimes!